The Kogi are a true lost civilization. The Kogi and their 3 sister tribes live interdependently on the highest mountain range coming out of the ocean in the world at the coast of northern Colombia. This has been their home for millennia and they are the only surviving culture that did not get annihilated by the arrival of the Spanish conquistadores over 500 years ago. The skill to survive the harsh conditions that they encountered while fleeing to higher altitudes where they could not be reached by their enemies and their tenacity to preserve their pristine culture and way of life have been a blessing for the entire world.

They were selected by the Divine Mother to be the caretakers of “THE HEART OF THE WORLD” from where they work hard to keep the balance and natural order of the world. In 1989, for the first time ever, they allowed a non-indigenous person into their sacred environment so that he could create a documentary about the urgency of change within each human being. It was becoming increasingly difficult for them to keep the Earth in harmony. The film is called “FROM THE HEART OF THE WORLD, THE ELDER BROTHERS’ WARNING”!

The Kogi do not understand our unresponsiveness to their first serious warning. They are deeply concerned that the ecological imbalance that has been created by the “Younger Brother” has reached such a critical point that the Kogi need help to keep their sacred sites protected in order to keep global balance. This is why they have decided to send a second warning through a new documentary called “ALUNA, the movie”. They want us to know that if we do not change our ways, we will be seriously reprimanded by the Great Mother, ALUNA, and her impeccable laws of homeostasis.

We feel deeply called to listen to their warnings and in return are calling for action to support them. We are asking you for your heartfelt donation to allow them to purchase the land and sacred places that are rightfully theirs and that have been invaded by reckless younger brothers. Without these places they cannot continue to work in Sacred Reciprocity with all ancestral spiritual seed guardians that hold the harmony of all living things in the Creation.

****** Note that the Kogi people do not want any visitors

& can only be contacted through their chosen representatives. 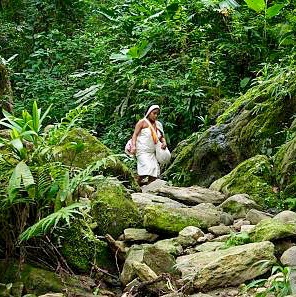